Powerdown has been designing and developing heavy duty shock absorbers for the Australian truck and trailer industry since 1983. Using this knowledge in 2005 the RAW 4×4 brand was created to design, develop and market heavy duty shock absorbers and lift kits specifically for 4WD applications. This is why Chris Mullet from PowerTorque magazine approached Powerdown when they needed to upgrade the shocks on their Dodge RAM 2500 Laramie. The Powerdown engineering team put the RAM 2500 up on the hoist to asses what shocks in the RAW 4×4 range would best suit the vehicle to improve overall comfort, ride, stability and safety, read the article below to see the results.

The motor industry used to be full of people with immense passion for all things mechanical. In a world where cars are now sold off information contained in an iPad, you can still find tremendous enthusiasm backed by personal knowledge in the allied industries such as tyre and brake outlets. Understanding tyre and rim sizes, together with predicting performance and handling levels to match a specific tyre to its intended use doesn’t come from a sales brochure.

It’s much the same with suspension experts. Given the role that springs and shock absorbers play in ride, handling and safety for the driver and passengers, there’s much to consider when the time comes to replace or upgrade the original factory fitment.

Just as the footprint of the tyre dictates the way the vehicle will corner, brake and accelerate, the shock absorber plays its role in the same scenario. When the tyres and the suspension systems are working in harmony, safety levels are at their maximum. The trick here, though, is to realise that time and distance changes the abilities of these components to work effectively together and at peak efficiency.

The handling of most European vehicles is tuned to enable a driver to respond to cornering forces when travelling on good quality roads, where stability and performance contribute to driving pleasure. Those inherent traits do not necessarily transfer to vehicles in North America, where flat surfaced concrete freeways abound with ridges where sections of road pavement join, producing the rhythmic thumping sound from tyres as they cross the joints.

The North American auto industry has traditionally favoured soft suspension with a reduced level of rebound damping to minimise the intrusion of the tyre thump common on freeways. That’s fine for long distances on flat roads, but that handling trait doesn’t necessarily transfer well to the typical road network found in Australia. Our course, bitumen road topping with in-built camber to enable heavy rainwater run-off creates handling and steering obstacles that have to be overcome when seeking the right degree of steering and suspension response.

Tuning a suspension system becomes significant if the driver is seeking specific ability such as turning in on cornering and resistance to potholes and road surface undulations. The right level of suspension damping is also a matter to consider if the vehicle is being set up to tow a heavy trailer through a towball or pintle hook, or a fifth wheeler gooseneck trailer. 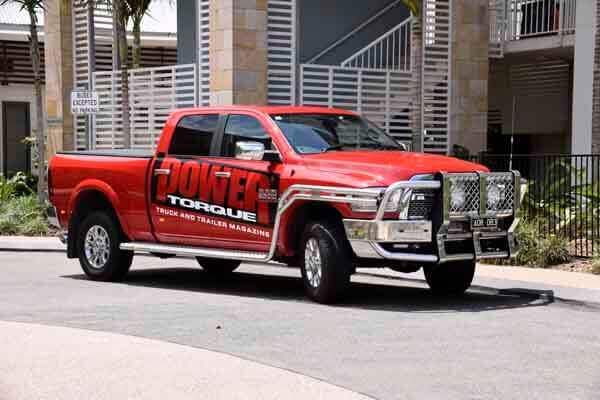 PowerTorque’s RAM 2500 tackles the run south towards Brisbane and Sydney with a long-legged approach that, from an engine and driveline perspective, is effortless. But when covering a weekly distance in excess of 4000 km, the driver can appreciate the American suspension tune is not necessarily providing the maximum available level of steering and suspension response. It’s at a time like this that Australian know-how comes to the rescue.

Founded in 1983, Powerdown is one of Australia’s leading suppliers of heavy vehicle shock absorbers. Having specialised in the design, manufacture and supply of suitable shock absorbers for heavy-truck and multiple-trailer combinations, the company took the decision to expand downwards through the weight ranges into the ute and light truck segment. This move resulted in Powerdown launching the RAW brand of shock absorber in 2005, followed by the Predator range, with its unique brand personality as a customisable product suited for utes, 4WDs and light trucks.

“We provide shock absorbers at the high weight range as original equipment or as replacement items for selected brands. Because we understand the Australian operating conditions, our damper designs utilise oil with a higher flashpoint so that it can reach a higher temperature before it starts to thin out. These can cope better with our weather conditions and provide greater durability,” said managing director Mat Gatgens.

“The larger style damper tube also enables us to take advantage of including extra oil capacity, another feature that enhances durability. With these practical benefits we can then drop the valving levels, so the ride comfort does not impact on the vehicle load or other suspension components through excessive damping harshness,” added Mat.

With a product range that now encompasses damper requirements from light trucks and utes, right through to heavy haul, exceptional load, multi-trailer requirements, continual growth has resulted in the development of new export markets such as New Zealand, South East Asia, Africa and the Middle East.

“The right choice of replacement shock absorber basically comes down to personal preference on what the driver feels the vehicle is doing,” said Adriaan van der Westhuizen, Powerdown’s engineering manager.

“By tuning the front suspension damping response, the car will be a lot more controlled, stick to the correct line through a corner and maintain a strong connection to the road. Once this has been achieved drivers will also notice an immediate reduction in the amount of float on a series of undulations as experienced in straight-line running,” said Adriaan. At around 3820 kg tare weight, PowerTorque’s RAM 2500 Laramie was assessed by Powerdown’s engineering team as requiring additional front rebound control, with a reduction in total full damper rod extension by 10 mm. This additional control would prevent the possibility of a worst-case scenario where the front suspension coil spring could become unseated while negotiating a deep pothole at low speed. 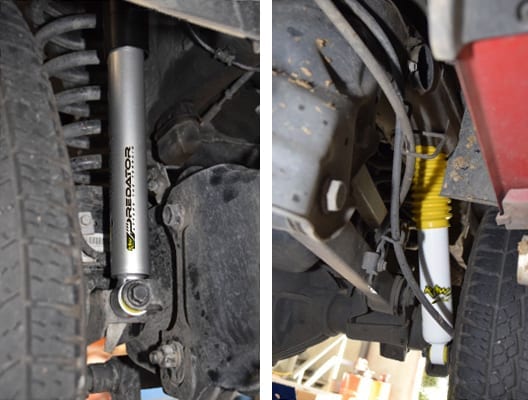 The RAW Predator monotube damper Powerdown recommends for use on the front of the RAM benefits from having an integral 60 lb force of gas that adds slightly to the standard spring rate.

The RAW Predator shock absorber range is manufactured in Australia, and its fast acting monotube design incorporates a unique variable flow piston. Heat dissipation is handled by the single wall construction, resulting in consistent performance with sharper steering response, less body roll and improved traction. It features an increased rod diameter, with all coil-over shock absorbers having an 18 mm diameter piston rod for extra strength and durability. With a bore diameter of 46 mm it helps the damper stay cooler for longer under extreme working conditions.

The dampers recommended for the RAM are a specific build modified to get the correct operating lengths and valving. Slightly greater recoil control reduces the vehicle bounce off the back that affects the bounce on the front.

By reducing compression and recoil it absorbs the thumps between concrete sections, as experienced on typical North American freeways.

Back in the day, the method for checking the performance of a shock absorber was to bounce up and down on a corner of the vehicle a few times using body weight, then stand back and see if the rebound was controlled to one or one and a half bounces. As you might expect, these days it’s not that easy. To check if the shock absorber is correct it needs to be removed from the vehicle and tested on specialised equipment, as today’s valving is speed sensitive. The damper also needs to be inspected for oil leaks, damaged mounts and bushing condition at all regular service intervals.

Mounting a kerb at high speed can push a damper outside its design parameters causing damage. Similarly, running over a kangaroo can promote a fatigue-related failure or develop an oil leak that will reduce its functionality over time.

Fleet managers and private owners alike need to focus on the maintenance levels required for the suspension system.

Far from being a set-and-forget mechanical item, the condition and functions of components should be checked at each regular service interval, and replacement should be considered, especially for light commercial vehicles, at intervals such as 80,000 km. It is rare to find reference to shock absorber replacement in a vehicle manufacturer’s service schedule, but the need to maintain peak performance will affect not only road holding, handling, steering, braking distance and comfort, but also tyre life.

As Adriaan van der Westhuizen outlines, it’s a complex question, but the lifetime of a damper is not an exact science. Factors that influence damper life include rural roads versus highways. Unbalanced tyres versus balanced tyres also give a significant increase in suspension wear, together with higher than recommended tyre pressures.

“When looking at heavy vehicles we can find that some may travel 500,000 km in one year with perfect damper ability,” said Adriaan.

“The angle and length of stroke of the damper on HGV trailers works on a motion ratio. If it is straight up and down it operates at the same velocity as the axle. If it sits inboard and moves at an angle, then the damper moves more slowly. Between the two different mounting systems, the one constant factor is that the energy a damper has to take out of the system remains the same.”

“The shorter dampers in this scenario have a handicap. They need stronger mounting points as they generate higher forces at lower velocities, and, because the unit is smaller, it has less oil inside.”

“Scalloping of tyre tread wear on edges of trailer tyres often relates to a wheel alignment issue, but flat patches across the tyre usually indicate a damper problem. Wear in ball joints and bushes reduce the functionality of the damper, and it is also important to check visually for cracks or deterioration presenting in neoprene or rubber bushes, versus synthetic rubber with a polyurethane bush,” said Adriaan.

Shock absorbers fitted by the vehicle manufacturer as original equipment may work perfectly on a standard specification vehicle. When changes to the application and use of the vehicle are made after purchase, such as when towing heavy trailers, the fitment of a large bulbar and sidesteps, front or rear-mounted winches and ancillary lighting systems, there can be substantial increases in tare weight. It’s in situations like these that aftermarket suspension specialists can provide a valuable improvement to the basic handling and performance characteristics of the vehicle, while improving overall safety standards.