“If you had $1000 to spend on upgrading your 4WD, how would you do it – and what difference would it really make” 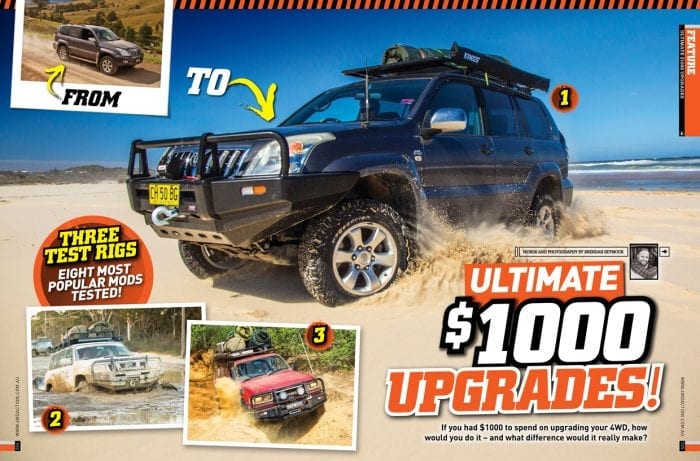 Below we have taken excerpts from the article specifically about the suspension upgrade. To find out about all the other mods click here to read the full article written by Brendan Seymour in issue 279 of 4WDAction.

PROVEN: THE REAL EFFECTS OF THE MODS YOU WANT: From camping to low-range mods, here are the most popular $1000 upgrades, before-and-after tested.

Geez it’d be nice if the modification fairy dropped off new parts every week, wouldn’t it? Unfortunately, in the real world where the only fairies that exist are the ones that take you to places like Moreton and Fraser, we’ve all got to be extremely selective with our coin, and how we spend it. When the opportunity does come up to invest a few bucks in your 4WD, you need to make sure it’s exactly the right move for you. In this issue’s test, we’re going to look at the most common ways that 4WDers will spend up to $1000 on setting up their 4WD. We’ll look at both camping upgrades to make your next night spend out in the bush that much more enjoyable and comfortable, and we’ll also look at ways to spend $1000 that’ll get your 4WD further off-road. We’re going to take three typical 4WDs and first test them as standard. We’ll camp out of them, we’ll push them up tough tracks, we’ll see just how much we can get out of them without any mods. Then we’ll head back to the workshop and to the driveway to fit up a whole range of parts that fall within our $1000 budget, before we head back out for more camping and 4WDing (it’s a hard life eh?) to show the real-world differences between the before-and-after setups. Our aim is to conclusively find out what the very best way to spend $1000 on your 4WD is. Up until now, everyone’s talked about it, but no-one has ever proven it!

COMMON COMPLAINTS THESE UPGRADES WILL SOLVE: The modifications we’re going to test seek to solve the following problems

If any of those complaints sound familiar to you, then this article is right up your alley!

To test out our variety of modification options, we’ve assembled three different 4WDs – all three wagons, two modern, one older, two diesel, one petrol. All are common 4WDs, with easily accessible parts – that helps us to do a little more to them under that $1000 budget, because the more parts there are available, the cheaper they all are to buy.

Vehicle one, and the vehicle we’re doing the majority of the testing on, is a 2008 120 Series Prado. Massively under-rated as an off-road family rig, these things have heaps of power, are ridiculously economical for what they are and are stupidly comfortable. Vehicle two is a 2013 3.0L common-rail ZD30 Patrol. We’ve owned this vehicle since new, and the vast majority of the time it has sported little more than a bullbar, winch, roofrack and tyres. It’s a work rig that plods around the country typically behind the camera, but this time around we’re going to bring it out in front of the lens.

Vehicle three is our old faithful 80 Series Landcruiser. This thing might have 400,000km and 20 years on it now, but it just keeps going and going. We’ve got one particular series of mods up our sleeve which we’re certain is going to transform this rig into an absolute off-road animal, all for under $1000!

WHAT WE’RE TESTING: The modifications we’re making to our test rigs, what they cost and where you can get ‘em 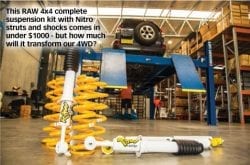 SUSPENSION – Every 4WD needs quality suspension, even if it’s a brand new vehicle. That’s not to say you need to lift your 4WD twenty inches up into the sky, but the right suspension kit will both provide a bit of extra under-vehicle clearance, as well as firming up the ride for better ride quality and load-carrying ability. For this test we spoke to the gurus at Raw 4×4, who provided a tailor-built RAW Nitro suspension package that amazingly came in under $1000. Price: $976

‘BEFORE’ TESTING: CAMPING AND 4WD ABILITY: To figure out how much each mod improves our 4WDs, we first need to establish a baseline to see how the vehicles perform without any mods

We took each vehicle out watching for different things. The Prado, which was to receive the bullbar and the suspension install, we watched to see how it performed on rocky, rutted tracks that challenged approach angle as well as suspension travel. It was immediately obvious that a lack of wheel travel hurt the family wagon – it would quickly run out of suspension, and sit there spinning its tyres uselessly. Even more apparent was just how much the lack of a bullbar was hurting the vehicle’s off-road progress. We were extremely worried about damaging the front of the vehicle on rocks, which meant a lot of the time we’d be crawling so slow that we’d lose all progression quickly.

ONE-WEEKEND 4WD TRANSFORMATION! How we turned our three test rigs into off-road weapons in a single weekend 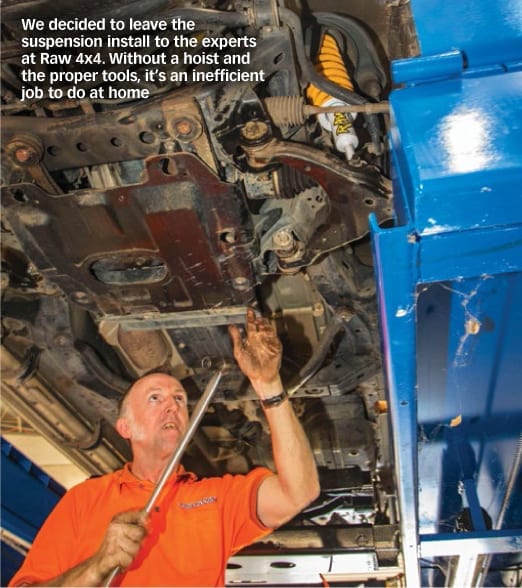 SUSPENSION – We decided to leave the suspension install to the experts at Raw 4×4. Without a hoist and the proper tools, it’s an inefficient job to do at home.

DIY SUITABILITY: Okay, this is one that we’re going to go ahead and rate as NOT being DIY suitable. The truth is you can, of course, fit suspension at home – and it’s something we’ve done plenty of times before. But as we’ve grown a little older, not much wiser and a lot fatter, we’ve realized that when it comes to suspension, unless you have a hoist and multiple gearbox jacks, you’re just wasting time fitting it yourself. We paid a little over $300 to have the gurus at Raw 4×4 install the kit for us, and it’s money we’d pay time and time again.

DIFFICULTY: 4/5 – particularly for vehicles with coil-over struts like the Prado we’ve had the suspension installed on. Again, you can do this at home if y ou have the time and the tools, and if that’s the case then awesome – you’ll save yourself serious coin. But considering you NEED a pair of coil-spring compressors (the scariest tool outside of a 9inch grinder with a bent mounting spindle) you aren’t going to save a whole heap if you need to buy specialist tools yourself.

TIME TO INSTALL: Four hours on a hoist – allow up to a full day if you’re at home on the ground.

TRAPS FOR NEW PLAYERS: Don’t forget that after any suspension change, you’ll need a wheel alignment to ensure your steer tyres are still pointing perfectly true. Don’t cheap out on it here – you’ll just scrub your tyres out quickly and find yourself up for replacements too soon.

TESTED: UPGRADED 4WD ABUILITY – How much further did the mods get our vehicle off-road? 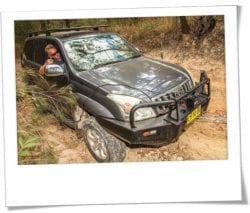 SUSPENSION – After having the suspension gurus at RAW 4×4 install our new suspension kit with RAW Nitro struts and shocks, we didn’t even have to head out bush to realise how much of an improvement had been made. It was immediately apparent even as we drove out of the workshop just how the ride had firmed up beautifully, without being overly harsh in any way. We’d used Raw 4×4’s online suspension builder before the install (a bloody handy tool by the way; www.kitbuilder.raw4x4.com.au) and spec’d up everything we were going to fit to the vehicle – bullbar, dual-batteries, rear drawers, roofrack, etc. That let the team build the suspension to the exact weight, because funnily enough, ‘heavy duty’ doesn’t suit all 4WDs. The spring rate has to be matched to the load to be carried, and if you aren’t carrying all the gear, then you don’t need the heaviest springs possible.

Okay, so straight away it was plain to see that ride quality had been improved massively. That’s a huge one for something like a Prado, which has been built to be comfortable to punch out massive kays in. But what about where it really counts – out in the scrub? To test the new suspension out, we went straight for our local playground, a maze of tracks filled with big ruts, rainforesty sections and long rocky steps. The Prado, while not exactly being a hardcore rock-crawler, was instantly more comfortable in the rough stuff. You could tell that it was keeping all four wheels planted a lot longer, particularly due to the extra wheel travel in the rear. That had the effect of pushing the opposite corner of the vehicle down into the terrain, keeping the weight over the front and preventing the front wheels from lifting.

The extra ground clearance was a big one too – particularly with ramp-over angle, which is typically a problem on a vehicle with a decently long wheelbase like the Prado. Still running its factory side-steps, where they would have dragged on big ramp-over mounts before, they noticeably cleared a lot more terrain. Better clearance, extra wheel travel and a vastly improved ride – and all from a suspension kit that costs less than $1000. Incredible.

RESULTS & CONCLUSIONS: What mods make the most difference, and where’s your upgrade money best spent?

Fitting up the 4WD Systems diff lock to the old LandCruiser was another game-changing modification. While it wasn’t exactly short of off-road ability to start with, the 4WD Systems Lokka turned the 80 Series in an absolute track-tearing animal that would stop at nothing. If you’ve never driven a vehicle with a diff lock then it has to be seen to be believed. If getting further up a track is what you’re looking to do, then the diff lock is what you need.

Bolting the Dobinsons bullbar to the front of the Prado was an incredibly quick way to enhance its off-road cred and ability. In an hour or so, you turn a vehicle that’s much more suited to shopping centre car parks, into a proper off-road machine ready to do battle with whatever track you can throw at it. The fact we were able to bolt up a winch to the vehicle at the same time goes even further towards building that off-road ability. It’s an incredible upgrade, and it’s highly recommended for multiple reasons. It’s close to our ultimate upgrade, but it gets ever so slightly nudged out by our final off-road $1000 mod.

That brings us to our final $1000 off-road mod – suspension. We can’t stop raving about the RAW 4×4 lift kit with Nitro struts and shocks that we had installed into the Prado. It improved the vehicle’s ride both on and off the road, let us safely carry a lot more weight and even let the vehicle flex a lot better at the same time! In terms of total transformation of vehicle, it stood out head and shoulders above the rest. That’s why we’re calling it our ultimate $1000 off-road mod upgrade!